New Kids on the Block’s Jonathan Knight walked off stage during a live-streamed concert on Thursday (March 4th). Knight has battled with anxiety issues for a while now, and this culminated in a rather embarrassing gig.

"Not 2 worry BHs, all is well w Jon!," the group wrote in a post on Twitter. "It was crazy album release week & we are all on a plane to Napa & look fwd to a grt show this weekend!" In a separate tweet they added, "We love you guys and thank you for your undying support! See you on the road!" John also used twitter to connect to his fans, but posted the rather succinct message: “I’m sorry......”. In the past, Knight has spoken on his issues with anxiety. In 2001, he chatted with Oprah Winfrey, saying: "I just always had this feeling inside of me of being nervous and afraid of situations," he told Winfrey. "The hardest thing for me was really just doing interviews, doing talk shows. … You just get shaky, your heart starts pounding, you get dry mouth … a little bit like I have right now." 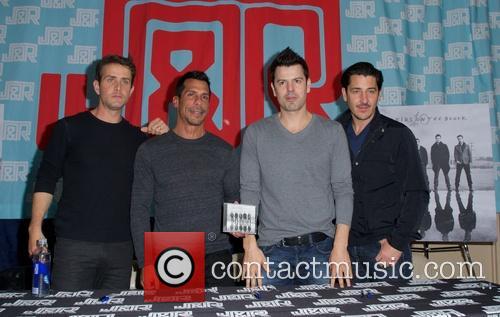 The guys, all together

Kinght also explained, in the interview with Oprhah, how the stress is what led to him eventually quitting the group. He rejoined the group when members reunited in 2008, but doesn’t seem to have overcome the issues which lead to Thursday’s on-stage walk-out.