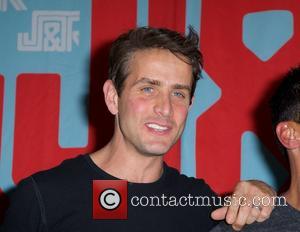 Singer Joey McIntyre is offering up New Kids On The Block concert tickets and memorabilia as prizes to encourage fans to sponsor his upcoming marathon effort.

The star has signed up for the annual Boston Marathon in Massachusetts and he is raising money for the Alzheimer's Association in honour of his mother who suffers from the condition.

MCIntyre has set up an online donation page on Crowdrise.com and is offering several incentives to encourage fans to dig deep.

In a post on the site, he writes, "My mother suffers from Alzheimer's disease. She loved to walk everywhere. Never had a driver's license - so I'll run for her instead in the Boston Marathon.

"And! Just for fun, I'll be randomly giving away (regardless of the size of the donation) 5 pairs of tickets to The Package Tour: This summer's boy band bonanza across North America: New Kids on the Block/BoysllMen/98Degrees... and 10 signed tour T-shirts... and 10 signed Nkotb '10' Cds. That's 25 prizes in all!! But I know you'll donate just because."