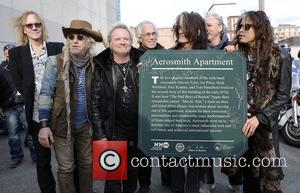 Picture: Aerosmith's Steven Tyler, right, Joe Perry, Joey Kramer, Brad Whitford and Tom Hamilton hold a signed plaque that is to be mounted outside of 1325...

The band was forced to scrap a show in Concord, California last week (ends15Aug14) when Kramer fell ill and it was feared Saturday's show at The Gorge would also be axed, amid reports suggesting the drummer was suffering heart-related issues.

He took to Twitter.com on Thursday (14Aug14) to assure fans he was feeling fine, and the band announced Saturday's show would not be cancelled.

But it was Kramer's son Jesse who took over his dad's drum seat when the band hit the stage.

It wasn't the first time Jesse has sat in for his father - he has often added percussion at Aerosmith shows in the past decade.

The band has yet to comment on Kramer's illness, but a publicist insists he "has no history of a heart condition".

Meanwhile the drummer says, "I'm feeling better than ever... I'll be back sitting in the best seat in the house, hitting it harder than ever for our amazing fans."

Aerosmith are next scheduled to hit the stage on their ongoing Let Rock Rule tour in Colorado on Tuesday night (19Aug14). It is not known which Kramer will join them.