Aerosmith Star Joe Perry Is Mystified About Reports Of A Long-standing Feud With Rush, Insisting He Has No Recollection Of Playing With The Canadian Band Or Apologising For Treating Geddy Lee And His Bandmates Badly When They Supported His Group In The 1970s. 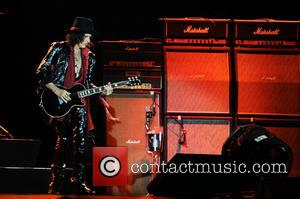 Lee has been open about his days on the road with Aerosmith, claiming Perry and company denied them soundchecks and turned down their volume - and now he reveals in the new issue of Rolling Stone he took the high road when Perry's side project opened for Rush, treating them well and telling the guitarist he would never want anyone to feel "the way we did when we opened for you".

The Rush frontman admits he can't remember the exact conversation he had with Perry, but admits the Aerosmith rocker apologised.

The story has prompted a response from the guitarist, who says, "Frankly, I don't remember playing with Rush."

But he insists Aerosmith were always given "the short end of the stick" when they opened for other acts, and he and his bandmates have always told their crew to "take care of our openers".

However, he does recall hitting the road with Rush as a member of the Perry Project and adds, "I want to thank them for treating the Project so good, and actually taking the time to ask if everything was OK. I hope I had the presence of mind back then to apologise. I want to congratulate Rush on their longevity, because, like us, they're still around to tell the tales."