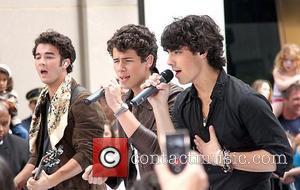 Joe Jonas has moved on after his split from actress Camilla Belle - the pop star is reportedly dating CAMP ROCK co-star Demi Lovato.
The Disney sensations grew close after appearing in the musical last year (08) and they are scheduled to share a movie set again when Camp Rock 2: The Final Jam goes before cameras.
However, the pair is rumoured have more than a work relationship.
Joe, 20, publicly displayed his affection for 17-year-old Lovato earlier this month (05Oct09) on a double date at a Toronto, Canada restaurant with older brother Kevin and his fiancee Danielle Deleasa.
A source says, "They're more than just friends."
Belle and Jonas, who previously romanced Taylor Swift, ended their romance in July (09).