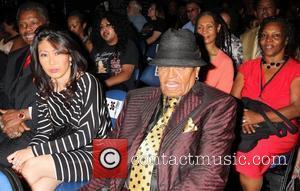 Picture: Joe Jackson watching from the audience during The Jacksons Unity Tour 2012 at The Cannery Las Vegas, Nevada - 20.07.12

The Jackson family patriarch and former manager of the Jackson 5 was admitted to a Las Vegas hospital after falling ill on Thursday morning (29Nov12), and La Toya subsequently told fans Joe was "recovering" and feeling "a lot better".

However, she has now revealed that his health scare was more serious than first reported.

When asked by a Twitter follower on Sunday (02Dec12) what had happened to Joe, La Toya replied, "He had 3 strokes", before adding, "He's doing so much better now!"

She also told her fans, "Just spoke to my father & he is doing extremely well! So proud of his strength in recovery! He thanks you all for the well wishes & prayers!"