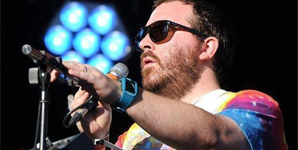 Hot Chip's Joe Goddard has been very busy lately, producing new material for Hot Chip's fifth studio album, The 2Bears' debut offering and is set to perform at an upcoming SoCo Juke Joint event this month. We talk to him to talk about how he is juggling his time and what the future holds for Hot Chip.

CM: Hey Joe, you alright?
J: Hey, I'm great thanks.
CM: You are now part of 2 Bears. What made you want to form the duo piece with Raf Rundell?
J: For a long time we had just said it would be nice to work together. We DJed together a lot and always enjoyed that. Raf just eventually pinned me down and we started making music together two years ago. It began with just one track which was quite fun, and it grew from there, making an album. We've just been enjoying ourselves really. I've enjoyed it because Raf really knows what he's talking about when it comes to making House music. It's a real passion of his and it's something that I've become interested in in the past few years. It's been an education in that for me. It's taught me things which were really the main thing for me. I wanted to learn a bit more.

CM: How would you say your experiences have been different than from Hot Chip?
J: I guess, on a really basic level, Hot Chip was not really focused on House music; we did little bits of everything. There were also five of us and it was more of a live band. The 2 Bears are more two producers that work together. Raf is just a different person, we work in a different way than when I work with Alexis writing songs for Hot Chip. Raf doesn't play instruments as much. He just plays old records and we make tracks in a more dance music kind-of-way.

CM: You run your label 'Grecio Roman' which looks for unusual underground acts. What is the most odd or exciting act you have come across?
J: Recently on Grecio Roman we've had Totally Enormous Extinct Dinosaurs which are making a good name for themselves at the moment. They're signed onto Polydor and their debut album is coming out early next year. I think everyone is quite excited about that. We've worked with some other good people as well such as Drums of Death.

CM: What was the objective setting up the label?
J: The label grew out from us running 'Grecio' parties. So at first, the label was set up to release some of the artists who had DJ'd at our parties. Since, the label has just been growing really for the past five years. That is now the focus, rather than its party sense. Its aim is to find interesting pop music from around the UK and Europe, nurture it, and bring it to people. I've always loved records so putting them out is just a lovely thing to do.

CM: So you sound like you've been very busy. What's going on with Hot Chip then at the moment?
J: We are working very hard at the moment on our next album, which will come out around May or June next year hopefully. We've nearly finished about ten tracks for that. We're still writing and recording for that but we've got a lot done already.

CM: Have you found that your individual projects have affected your current Hot Chip sound?
J: I wouldn't say that there is a really different sound. It's quite recognisable to those who like the band. Hopefully, it will just be an evolution in the songs, which I always hope for, and being better in playing together. Also we are always learning about producing and mixing records and working hard to making new music, so hopefully things will just be getting better. I feel that the songs we already have are very strong and I guess we will wait and see if anyone else agrees with that or not.

CM: There have been many highlights in the past such as achieving a Grammy nomination with Hot Chip. What would you say was your best highpoint?
J: I think the great gigs I've played, such as playing at the Hollywood Bowl with LCD Soundsystem was really wonderful, or playing big sets at Glastonbury which I think for many bands is a defining moment just because of the fantastic atmosphere. You feel that people are really willing you on and supporting you. People are very vocal and it's a very good feeling. I think many of us agree that the times we played at Glastonbury in the past few years have been great moments for the band. We also just heard that our song 'Boy From School' will be playing on an episode of The Simpsons so we're very excited for that [laughs]. It didn't take us long to reply. We're happy for that to happen.
CM: In contrast, what would you say was your biggest regret in your musical career?
J: [laughs] There was talk of me and Alexis doing writing sessions with Adele for her latest album which has just become so massive this year. So I guess I wish that we had done that rather than not making time for it. I think that she is an incredible artist and the fact that we could've got involved on that record makes me feel a bit sick.

CM: You are performing at an upcoming Southern Comfort event called Juke Joint on November 17th Can you tell us a bit more about that?
J: The idea is that it is an old American institute. The drink joint is a place where old black workers and farmers could get into a proper music venue where they would create their own juke joint with their own music. They would have their own night out really. Southern comfort has tried to recreate that. It's not that fancy, not about guest lists and things like that; it's supposed to be a good old fashioned party. It's open to the public, you can get tickets online.

CM: What can fans expect from the show?
J: It'll be me DJing, playing probably some new Hot Chip stuff, some stuff by The 2 Bears and some stuff under my own name that I've been working on this year. Just some good house music, techno, garage; generally a good party set.

CM: What does 2012 hold for you and what would you have liked to have achieved by the end of it?
J: I guess I would've liked to achieve the obvious things such as The 2 Bears' album being well received. I don't think there's really a chance of it selling rapidly but I hope that it sells well so that the record company is happy. I hope the same is achieved for the Hot Chip record. I hope to go back onto the road with Hot Chip and do the same shows that people respond to well. I'd like for people to keep responding well to our music because having this career in music is very important to me. I love it. I love making songs and I would still want that to continue.
Thank you so much for your time Joe.