Had Joe Budden not become one of hip-hop’s most talented MCs, what career path would he have chosen instead? “I would have become a lawyer,” the Jersey City resident concedes in his authoritative baritone voice, “because I like to debate.” With characteristically wry humor, Budden adds: “But I wasn’t that good at the school thing.”

Though his dreams of litigation may have been prematurely shelved, Budden’s immense skills as a hip-hop lyricist – he’s a rapturous storyteller with a cocky flair for wordplay - are not that different than the skills a lawyer might bring to the courtroom. Those exceptional skills are on full display for Budden’s second album, The Growth (Def Jam), a solid collection of hard-driving club tracks and introspective midtempo tunes, all anchored by Budden’s confessional lyrics and trademark rapid-fire rhymes. The album’s evocative title refers not only to the positive transformations in Budden’s professional career, but also to his burgeoning maturity as an artist and human being.

Before rising to the ranks of one of mainstream hip-hop’s most electrifying MCs, Budden launched his career seven years ago as one of the most promising underground rappers on the East Coast. Having developed a strong following on the mixtape circuit, he nabbed a record deal that led to his eponymous 2003 Def Jam debut. While Joe Budden received critical raves and chart success with Just Blaze-produced club anthems “Pump It Up” and “Fire” (featuring Busta Rhymes) , the album didn’t make the rapper a household name. “At first I was discouraged and frustrated that the album didn’t have the success that I thought it would, but now there’s none of that thinking. I just want to give my fans the same quality of music that I’ve been bringing since day one. Hopefully, the same quality music will bring a bigger reaction.”

The Growth capitalizes on the musical strengths of Budden’s debut, delivering a stream of hard-hitting party anthems, including the sinister West Coast homage “Gangsta Party” featuring hip-hop vocalist Nate Dogg and produced by Scott Storch and the bubbly, seductive uptempo “Sacred” featuring R&B crooner Marques Houston, produced by Budden’s up-and-coming hometown cohorts Presidential. In the two years since his debut album dropped, Budden has maintained public visibility by making cameo appearances on remixes by Jennifer Lopez, Fabolous, Christina Milian and 112, among others. He also briefly co-hosted the morning show on New York’s hip hop radio station Hot 97, and he’s made musical contributions to the Cradle to the Grave soundtrack and even emerges as a character in Electronic Arts’ popular video game Def Jam Vendetta. Last year, along with artists like Jay-Z and P. Diddy, Budden protested the Rockefeller drug laws in support of Russell Simmons’ Hip-Hop Summit Action Network.

The Growth not only refers to Budden’s resilient ability to bounce back from professional adversity - it’s also his general prescription for self-improvement. While recording his follow-up album, Budden became increasingly aware that too many of his peers from his Jersey ‘hood seemed to lack goals and ambition. “I began to see too many smart young brothers with no type of aspiration,” Budden declares, “just wanting to stay on the block for the rest of their lives.” In response, some of songs on The Growth speak directly to the possibility of self-transformation. For instance, “Star in You,” produced by long-time collaborator White Boy (aka D-Dub) – who delivered one of the debut album’s best-known singles, “Focus” - is an affirmative, uplifting tune featuring a looped old-soul sample. The song’s lyrics focus on developing self-worth through self-help.

Hip-hop has always served as therapy for Budden. Born in Spanish Harlem before relocating to Queens and then Jersey City, the rapper spent many of his teenager years dangerously addicted to narcotics and battling severe depression. Listening to music at home (his father is a multi-instrumentalist) and in the streets became Budden’s release from a turbulent upbringing.

Songs on his debut album like “Walk with Me” and “Calm Down” featured cathartic, emotionally naked lyrics that were inspired by Budden’s idols like Rakim. On his follow-up album, Budden demonstrates even greater sophistication and thoughtfulness as a lyricist. “Three Sides to the Story” is a brutally honest, tragic masterpiece about incest in which Budden steps in the shoes of three family members: the first verse is told from the perspective of the brother who sells drugs to support his family; the second is told from the perspective of the sister who is being molested by her stepfather; and the final verse is told from the perspective of the abusing stepfather himself. Budden was inspired by an real-life situation in which an extended family member confided to him that she had been raped. “I used to only be able to talk about my own stories,” he reflects. “I now recognize that my story was unique – I didn’t have the normal story that everyone can relate to. I can now observe and watch and write about other people’s stories, not just my own.”

Budden’s musical ambitions have also become more complex. The Growth is a more diverse collection of sounds and sonic ideas. Budden’s brought on board an accomplished list of top-notch producers including Scott Storch (“Gangsta Party”), Timbaland (“What’s Up Tonight”), and Swizz Beats (“Ain’t Nothin’”). True to his underground roots, Budden is also eager to promote lesser known producers: Doula offers “Get it Started” featuring Roc-a-Fella crooner Rell and Ryan Lugo (SPP?) who produces the hard rock “Unforgiven” featuring Lars Ulrich from Metallica and an interpolation of the metal anthem of the same name.

With two accomplished albums under his belt, Budden has also become more astute about the business of making music. He’s currently diversifying himself by developing new music and film projects with On Top Management. “I got my record deal at age twenty-one and when my first single ‘Pump it Up’ came out, I was 22,” says Budden. “Everything happened extremely fast, and I was just going with the flow. I didn’t know too much about how the business worked. I was on the boat riding with whatever happened.” This time around, as a businessman
Contactmusic
Facebook
Twitter
Google+
Pinterest
StumbleUpon
Reddit
Fark
Email
Comment
Follow Joe Budden 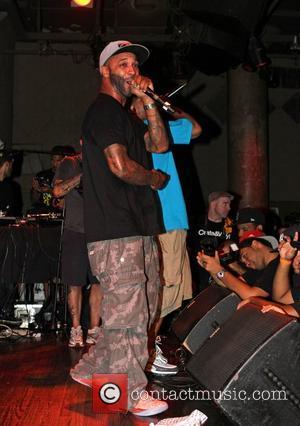