Jodie Marsh is planning to get her husband's name, James Placido, tattooed on her arm whilst he wants to get an inking of Jodie as a pin-up.

Jodie Marsh wants to get her husband's name tattooed on her arm.

The 36-year-old model, who is known for having a number of inkings over her body, is keen to add her new spouse James Placido, whom she married eight months ago, to her collection of etchings.

She said: ''I have a tattoo on my arm that says, 'Jodie Marsh only sane person left, exclusive.' But I've said to James that I'll add his name to that as we agree we're the only same people in the world! But James is getting a pin up of me on his arm - it's going to replicate one of the glamour shots from my lads' mag days!''

The bodybuilder met her beau in a car park in Essex and has admitted she was instantly attracted him and his dirty work clothes.

She explained to Closer magazine: ''He's moved into my place. Before we met he was living in a caravan in a field as it was cheaper than renting a house. But it made me fancy him even more because he was almost like Bear Grylls.

''When we met he owned one shirt and lived in greasy tracksuit bottoms because he's always working with cars and scrap metal.

''But it's such a turn on and he really is my dream man. I can't be doing with these silly little Essex boys. They're too vain and are real mummy's boys.'' 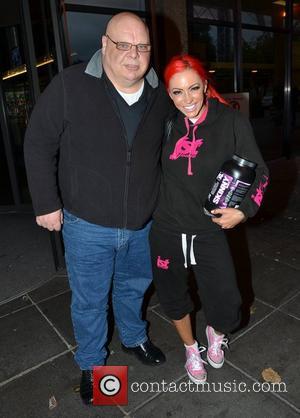