Foster made her movie breakthrough almost exactly 40 years ago in 'Taxi Driver', and she's expecting 'Money Monster', her fourth direction project, to be released on May 13th.

Jodie Foster has received a star on the iconic Hollywood Walk of Fame, after nearly five decades in the movies in front of, and behind, the camera.

The 53 year old actress was present at the unveiling ceremony on Hollywood Boulevard, and she gave a short acceptance speech after her name was confirmed among the copious hundreds of others who have graced the movie and entertainment industry over the years. She made her name in the controversial Taxi Driver in 1976, and is probably most famous for her Oscar-winning role as Clarice Starling in The Silence of The Lambs.

“I grew up blocks from Hollywood Boulevard and would cross it every single day of my life,” she said as she acknowledged the honour. “And you do that thing where you're like, 'Will I ever be on the Walk of Fame someday?'” 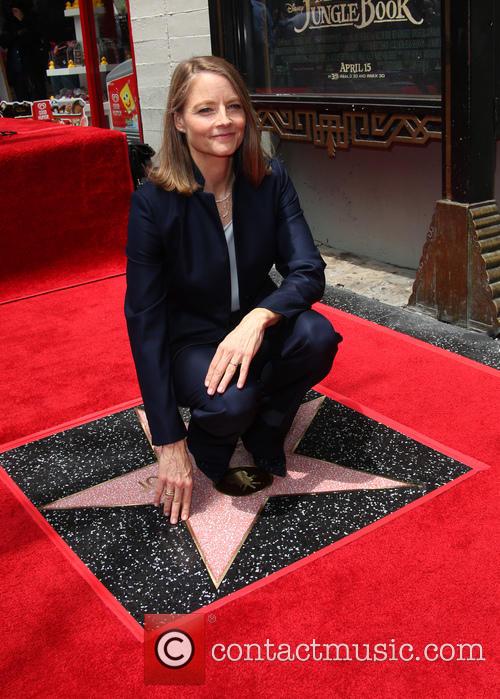 Jodie Foster receives her star on the Hollywood Walk of Fame on Wednesday, May 4th

When the ceremony of finished, People magazine interviewed her about her childhood and what it was like being surrounded by movie iconography, and what the award meant to her.

“It feels nostalgic and kind of emotional. It just reminds me of conversations that I had with my mom, 10 blocks from here about Hollywood Boulevard and what it represented," she said. “She'd drive down the street and talk about the history of it. Talk about Clark Gable and all the premieres that happened at Mann's Chinese – Grauman's Chinese at the time. It's a great bit of nostalgia and I feel honoured to be a part of it.”

However, she’s been waiting to receive this honour for quite some time, and she revealed that she would only have wanted it in recognition of something she was actually directing, rather than just starring in. Her fourth direction project, the star-studded Money Monster featuring George Clooney and Julia Roberts, is opening in American theatres on May 13th.

“I made this conscious decision that I didn't want to have a star on Hollywood Boulevard unless it was in a conjunction with a movie I was directing. I don't know why that was important to me; it seems silly, but that's why I waited all these years,” she told the assembled crowd.

Elaborating on this later, she said: “when I was a kid I didn't think I would be able to be a director because I never saw any woman directors.” Asked how about a role model status, she remained modest. “I don't know if I'm a role model… But I just want to make movies, you know that's all I've ever wanted to do.”

Kristen Stewart, who played Foster’s on-screen child at the age of 10 in Panic Room, was at the unveiling ceremony to pay tribute to her. “She's always encompassed what I thought was sort of the prime example of where you want to be and she's been there for me… she's a baller on every level. She did everything young. She kicked Yale's ass. She won Oscars. She became a filmmaker herself. She created a family and still is just normal and cool and kind.”