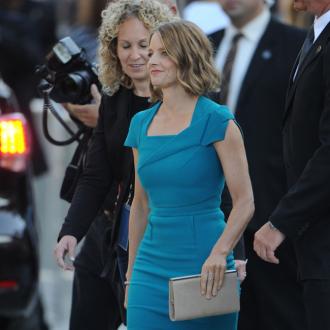 The 50-year-old actress - who split from Cydney Bernard in 2008 after 20 years together - is in a relationship with photographer Alexandra Hedison.

A source told E! News: ''It's pretty serious. They're totally in love.''

Alexandra dated Ellen for three years before the couple split in 2004 and the chat show host went on to marry Portia De Rossi.

Earlier this year Jodie publicly acknowledged her sexuality for the first time as she accepted the Cecil B. DeMille Award - which is given in recognition of outstanding achievement - at the Golden Globe Awards.

She explained she felt the time was right to confirm she is gay but joked it didn't mean she was about to subject people to a fly-on-the-wall account of her personal life - because she isn't interesting enough.

She said: ''A big coming out speech tonight ... I already did my coming out about a thousand years ago, back in the stone age.

''In those very quaint days when a fragile young girl would open up to trusted friends, and family, co-workers and then gradually, proudly, to everyone who knew her.

''To everyone she actually met. But now, apparently I'm told, that every celebrity is expected to give the details of their private life with a press conference, a fragrance and a prime time reality show ... I'm sorry, that's just not me and it never will be.

''But please support me because my reality show would be so boring. I would have to make out with Marion Cotillard, and spank Daniel Craig's bottom just to stay on the air.''

Jodie - who began her career when she was just three years old - admitted being in the public eye for so long was one of the reasons why she had never acknowledged her sexuality.

She added: ''But seriously, if you had been a public figure since the time you were a toddler.