Phoenix Comes Out Of Retirement To Play Poe 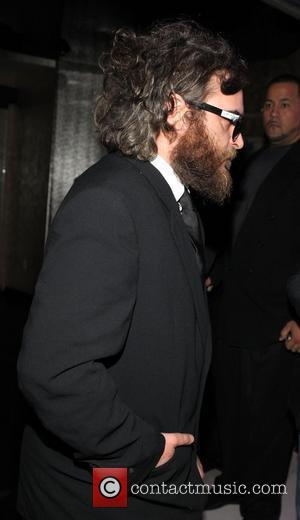 Picture: Joaquin Phoenix arrives at LIV Nightclub at Fontainebleau ahead of his hip-pop performance at the venue Miami, Florida - 11.03.09

Joaquin Phoenix's rap career has been put on hold - he will return to the big screen as EDGAR ALLEN POE, according to Oscar-winning sound engineer RESUL POOKUTTY.
The Walk The Line actor quit Hollywood last year (09), announcing plans to focus on becoming a hip-hop star.
He disappeared from the spotlight, only emerging for a string of bizarre TV interviews, which saw him sporting a scraggly beard and giving one-word replies to questions, and a couple of disastrous gigs.
However, Slumdog Millionaire sound designer Pookutty has revealed Phoenix is heading back to acting to play iconic American writer and poet Poe.
Pookutty tells India's Mumbai Mirror, "I couldn't be happier because I am doing a period film. It is a very special challenge because I have to recreate the sound textures of New York in 1854.
"It's an adaptation of The Beautiful Cigar Girl by Daniel Stashower and based on an eerie real-life experience of author Edgar Allan Poe which happened just months before his death. Joaquin plays Edgar Allen Poe."