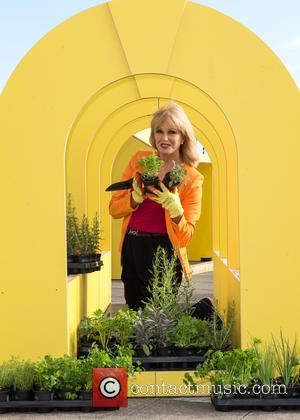 Picture: Joanna Lumley - Joanna Lumley working on a children's allotment on a rooftop in London, part of a new vibrant play area she is helping...

The veteran British star, who was best known for his role as John Steed in 1960s TV spy series The Avengers, passed away at his home in California at the age of 93.

He reprised his famous role in the 1970s when the show relaunched as The New Avengers, co-starring Lumley and Gareth Hunt, and his former colleague has now honoured her friend for his on-camera grace.

Lumley tells U.K. TV show This Morning, "I loved him. I think he was so much a part of our lives, obviously a huge part of mine, having been lucky enough to work with him for two whole years. I loved him dearly. The funny thing is he thought he acted Steed - but he was Steed."