Joan Rivers To Have A Private Funeral

Joan Rivers will have a private funeral on Sunday.

She may have been known for her larger than life personality, but Joan Rivers will have a more low key send-off this Sunday in New York.

The comedienne joked about having an extravagant funeral in her 2012 book 'I Hate Everyone...Starting With Me', stating "I want my funeral to be a huge showbiz affair with lights, cameras, action … I want Craft services, I want paparazzi and I want publicists making a scene! I want it to be Hollywood all the way. I don’t want some rabbi rambling on; I want Meryl Streep crying, in five different accents. I don’t want a eulogy; I want Bobby Vinton to pick up my head and sing ‘Mr. Lonely.’ I want to look gorgeous, better dead than I do alive. I want to be buried in a Valentino gown and I want Harry Winston to make me a toe tag. And I want a wind machine so that even in the casket my hair is blowing just like Beyonce’s."

According to Fox the actual ceremony will be decidedly less lavish, and will take place at the weekend at Temple Emanu-El Synagogue in New York. A life-long practising Jew, her funeral will be a closed casket in accordance with religious practices. The family have also asked for donations to various charities instead of flowers, including God's Love We Deliver, Guide Dogs for the Blind and Our House Grief Support Center. 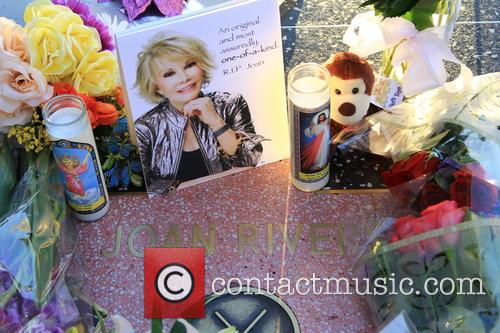 Yesterday her 'Fashion Police' co-star Kelly Osbourne posted a heartfelt tribute to her friend on Facebook: "I'm completely heartbroken by the loss of my beloved Joan. Not only was she my boss, she was and will always be my teacher, therapist, closest friend, inspiration and the only grandmother I ever knew. She was family and I will never forget her. Laughter will be difficult for a while but when I'm sad, lonely or upset all I will have to do is think of Joan and a smile will cross my face. Laughter is what she gave us and laughter is what she would want us to do in remembrance of her."

The clinic where Rivers was being treated as an outpatient at the time of her initial cardiac arrest, Yorkville Endoscopy, is under investigation from the Department of Health and NYC Medical Examiner’s Office.