Academy Awards Explain Why The Late Joan Rivers Was Snubbed

The queen of red carpet reporting was ignored by the Oscars during their 'In Memoriam' section on Sunday night.

It’s an annual tradition that the Academy Awards pays tribute to those actors and filmmakers that have died in the last twelve months, and it was no different on Sunday night. Except, there was one major exclusion from the ‘In Memoriam’ reel last night – comedienne and actress Joan Rivers.

A rep from the Academy stated to The Hollywood Reporter: “Joan Rivers is among the many worthy artists and filmmakers we were unfortunately unable to feature in the ‘In Memoriam’ segment of this year's Oscar show. She is, however, included in our 'In Memoriam' gallery on Oscar.com.” 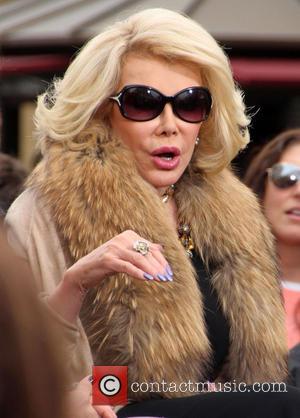 Many outraged fans took to social media after the section had finished to express their disbelief that Rivers was not among the fifty names on the reel, which included obscure marketing executives unknown to the public at large.

More: Melissa Rivers to release ‘The Book of Joan: Tales of Mirth, Mischief and Manipulation’ honouring her late mother

The notoriously sharp-witted stand-up comic passed away suddenly in September last year following complications that arose from alleged medical malpractice during a routine check-up. Her daughter, Melissa Rivers, filed a lawsuit last month against Yorkville Endoscopy where the incident occurred.

Though she was obviously most famous as a comedienne and fashion reporter, Rivers did play a huge part in revolutionising red carpet reporting. Both she and her daughter helped turn the red carpet into an interactive zone, a sub-category of movie entertainment with its own rules of engagement. Many would think that this contribution to movie culture is worthy of recognition alone.

She does have a handful of film credits to her name, however. She took voice roles in Look Who’s Talking, Spaceballs, The Muppets Take Manhattan, Shrek 2 and The Smurfs, and made a cameo appearance in Iron Man 3 in 2013.