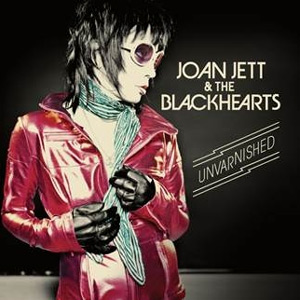 Hot on the heels of being honored at this year's Sunset Strip Music Festival and the City of West Hollywood's official proclamation of August 1 as "Joan Jett Day," the rock n roll icon is set to release her first CD of all original music in more than seven years.  Joan Jett and the Blackhearts will release their 14th studio album UnvarnishedOctober 1 on the Blackheart Records label.  The album features ten original tracks and a Deluxe Edition will feature four additional bonus tracks.  The first single, "Any Weather" will make its television debut on Jimmy Kimmel Live! on August 8th.

Jett has said that Unvarnished is the most autobiographical project she's ever done, allowing some of life's hardest passages, such as the loss of both her parents, dictate what she wrote about. The album also broadens to other subjects, such as applauding the determination of Hurricane Sandy's victims and lighthearted commentary on today's trend of oversharing.  Jett expanded her creative process to work with musicians like Dave Grohl and Against Me's Laura Jane Grace, as well as continuing her work with longtime writing partner Kenny Laguna.  "It's a real band album. Everybody was involved," she says.

JOAN JETT AND THE BLACKHEARTS