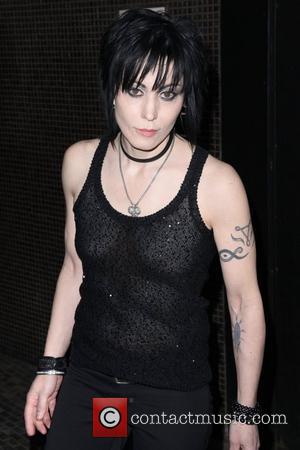 Joan Jett and her former RUNAWAYS bandmate CHERIE CURRIE gave actresses Kristen Stewart and Dakota Fanning a taste of their rock 'n' roll lifestyle - when screaming fans mobbed them at a party.
Stewart and Fanning play the real-life rock stars in new movie The Runaways, which tells the story of the influential 1970s band.
The film premiered in New York on Wednesday night (17Mar10), and the two actresses hooked up with Jett and Currie at the event's afterparty - only to find themselves in the middle of a fan frenzy at the city's Bowery Hotel.
A source tells the New York Daily News, "In the movie, crazy fans are trying to break down glass doors to get to Joan and Cherie, and it was exactly like that... When Kristen and Dakota both changed out of their party dresses and into grungy jeans and tees (t-shirts) for the bash, they looked like the spitting image of Joan and Cherie more than 30 years ago. Especially when they were chain-smoking on the terrace - and they wouldn’t leave each other’s sides the whole night."