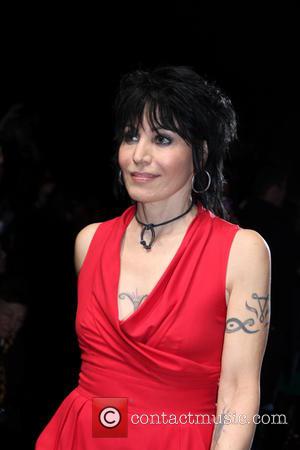 Joan Jett, Sonic Youth's Kim Gordon and Lorde channelled the spirit of the late Kurt Cobain on Thursday (10Apr14) as they performed with the surviving members of Nirvana at the Rock and Roll Hall of Fame induction ceremony.

Michael Stipe from R.E.M. paid tribute to the grunge stars as drummer Dave Grohl and bassist Krist Novoselic were joined on the podium at the Barclays Center in Brooklyn, New York by Cobain's mother and sister and his widow, Courtney Love.

The Hole frontwoman proved that any bad blood between her and the existing Nirvana duo was in the past by calling Grohl and Novoselic her "family" and hugging them both, before saying, "I just wish that Kurt was here to hear this and feel this and be this.

She went on to dedicate Cobain's posthumous honour to their daughter, Francis Bean Cobain, who missed the ceremony due to illness.

Grohl and Novoselic then welcomed their female collaborators to rock out with them, with Jett taking charge of vocals on Smells Like Teen Spirit, Gordon joining the pair for Aneurysm, and St. Vincent singing Lithium.

Royals hitmaker Lorde helped the band close out the Nirvana reunion with All Apologies, which served as the explosive finale of the near six-hour induction ceremony.

Earlier in the night, Bruce Springsteen saluted his longtime backing musicians the E Street Band, and took the time to remember each and every person who had ever been a part of the group, including late saxophonist Clarence Clemons and his sidekick and "consigliere", guitarist Steven Van Zandt.

Soul icons Hall & Oates were inducted by The Roots drummer Questlove, but the singers' performance had to be briefly halted midway through a rendition of their 1976 classic She's Gone after experiencing technical problems.

There was no drama from Kiss, who were introduced by Tom Morello, as the original line-up of Gene Simmons, Paul Stanley, Ace Frehley and Peter Criss reunited to join the Class of 2014, although they stuck to their vow not to perform after learning that Hall of Fame bosses would not be honouring current bandmates Tommy Thayer and Eric Singer.