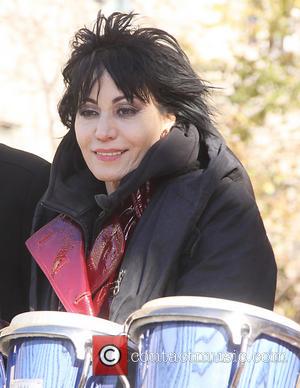 Rocker Joan Jett has fired off a cease and desist letter to the president and Ceo of SeaWorld in Florida after learning her I Love Rock 'n' Roll anthem is part of the theme park's Shamu Rocks show.

The animal lover was appalled to discover her music was opening the display without her permission - and she wants it removed immediately.

In the note, Jett reveals she's no longer a SeaWorld fan after watching the documentary Blackfish, which details the conditions the park's killer whales are forced to live in once tourists go home and the gates are locked.

She writes, "I was surprised and upset to see on YouTube that SeaWorld used I Love Rock 'n' Roll as the opening music for its cruel and abusive 'Shamu Rocks' show. I'm among the millions who saw Blackfish and am sickened that my music was blasted without my permission at sound-sensitive marine mammals.

"These intelligent and feeling creatures communicate by sonar and are driven crazy in the tiny tanks in which they are confined. If I don't receive written confirmation that SeaWorld will cease and desist from using any Joan Jett & the Blackhearts music, I will be forced to take further action, and you'll find me among the Peta protesters outside your parks."

Jett's cease and desist missive to Jim Atchison is the latest celebrity black eye the theme park has suffered in recent weeks as stars cancel shows after viewing Blackfish.

Willie Nelson and Heart are among the acts who have scrapped shows at SeaWorld in Orlando.