Review of To America Single by Joan as Police Woman

Review of Joan as Police Woman's single To America 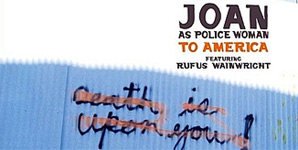 Were it not for the incontrovertible evidence otherwise, it would be hard not to make the assumption that Joan Wasser was one of the Big Apple's semi-famous for being semi-famous musos - she was girlfriend to the messianic Jeff Buckley at the time of his death in 1994, has been a session musician for the likes of Elton John and Lou Reed and long time collaborator and fan Rufus Wainwright appeared on her last album To Survive.

Wainwright guests on To America, on which his role-reversing employer showcases the qualities which she's used to win over a bunch of critics; the panache and smoky resonance of her voice, simple piano chords and a minimalist backdrop of subtle brass and strings. That is however until after about two minutes in, when with a drum roll it heads uptown to a bigger - if slightly incongruous - finale which even incorporates a fourth of July fireworks display. Worth investigation.