JLS have recorded a track with Saturdays singer Rochelle Wiseman - the girlfriend of band member Marvin Humes - but insists it is not intended for release. 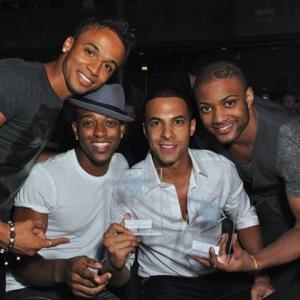 JLS have recorded a track with Rochelle Wiseman

The group asked The Saturdays singer - who is the girlfriend of band member Marvin Humes - to record the female vocal on a song they have written, but insists they won't release the recording as they intend for it to be a duet with someone else.

Marvin said: "She does help out. We've got an idea for a duet with a female star but we can't say who yet. When we had written the girl part, Rochelle came in and helped out and laid down the vocals for it."

"She did really well but we know who we want and it does look like it's going to happen with the other person."

While Marvin insists he would never release a record with Rochelle, his bandmates - Aston Merrygold, Oritse Williams and JB Gill - would love to see them collaborate on a musical project.

Aston said: "They could do it! You can already see the adverts. They would be doing Lionel Richie, 'All night long, all night...!' "

Oritse added: "They are secretly recording an album, 'Everlasting Love'."

However, Marvin insisted to the new issue of Britain's Star magazine: "We are not recording a duet or an album."