Dreaming of writing novels on a sun drench beach somewhere? Considering the champagne filled press tours and book signings around the globe? Thinking you can hob-knob with Hollywood's rich and famous as your book is adapted into a hit film franchise? Think again! Author Joanne Harris has warned writing professionally is not as easy and certainly not as highly paid as one would think.

Joanne Harris, the author of such bestsellers as Chocolat and The Lollipop Shoes, warned aspiring authors of the true nature and reality of becoming a writer. Which, she hastened to add, was quite unlike the life Harry Potter author J.K. Rowling now enjoys as a result of her hugely successful children's books and film franchise. Speaking at a parliamentary event last night (8th July) Harris explained how there is a common misconception about the lives of authors. She said people, especially children, have to understand the true nature of being a writer and this has to be emphasised from an early age so people are not inclined to download books illegally. She said "We have children, we have mortgages; we do not simply get showered with Hollywood money because we happened to write a little story about wizards one day."

Harris also stated how the attitude to downloading books illegally is one of defiance - "sticking it to the man"- against writers many presume are wealthy and are not greatly injured by the deed. Harris stated this was certainly not the case, she said "It's not winning the lottery. It's a real job, which real people do, and they have the same real problems as other real people. This tremendous mystique about being a writer and the mysteries of what people think we earn as writers, we need to puncture all those little balloons and just make people understand we are not 'the man'."

Harris, who was made an MBE last year, also suggested a remedy for this misunderstanding and said "Authors and creators should go into schools. Let children see what an author is like, let them go out into the community and talk to people."

Rowling would surely understand the plight of the average author as she wrote Harry Potter and the Philosopher's Stone whilst living off welfare and supporting her young daughter. As the Telegraph reports, the average author earns around £11,000 a year which is less than the minimum wage. The figure, researched by the Authors' Licensing and Collecting Society, is £4000 less than it was in 2005. However, this is certainly a change from Rowling's position as the 48-year-old is now estimated as being worth £570 million. 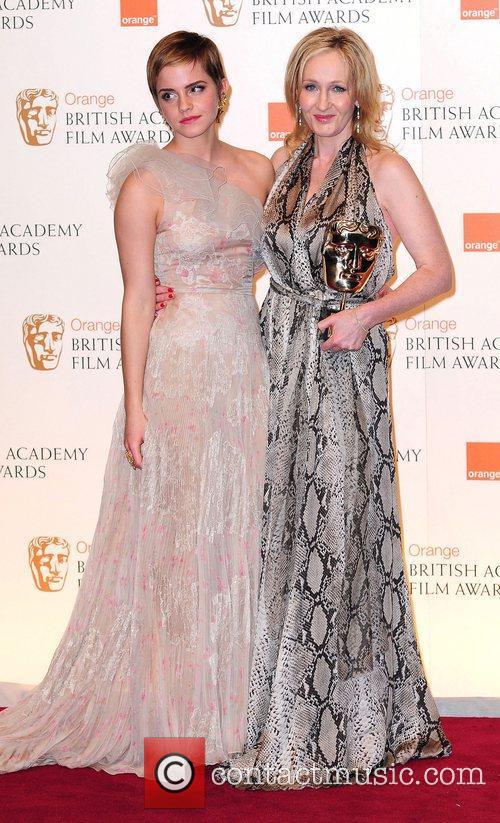 J.K. Rowling with actress Emma Watson (L) who played Hermione Granger in the film adaptations of the Harry Potter series.