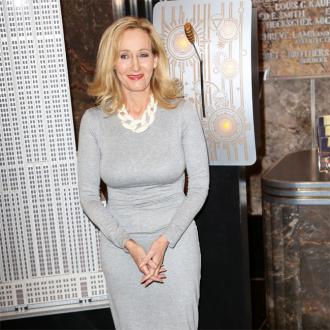 J. K. Rowling has branded a critic of Serena Williams' appearance an ''idiot''.

The best-selling novelist - who's best known for penning the 'Harry Potter' series - has leapt to the defence of the American tennis ace after a Twitter user tried to body-shame the muscular 33-year-old star following her latest singles title win at Wimbledon on Saturday (11.07.15).

Responding to claims Serena ''looks like a man'', J.K. posted a picture of her in a dress and tweeted: ''Yeah, my husband looks just like this in a dress. You're an idiot.''

Following her sixth Wimbledon win, J.K. heaped praise on Serena, describing her as an inspiration to other women.

She tweeted: ''I love her. What an athlete, what a role model, what a woman!''

However, J. K. was happy to concede that she's a useless tennis player herself, admitting that her ''T-Rex''-like arms make her unsuitable for the sport.

Asked whether she's ever played the game, the author said: ''My tennis game is non-existent. Feeble little arms like a T-Rex due to years of typing, typing, typing. Strong fingers though. (sic)''

Meanwhile, Serena has been romantically linked to hip-hop star Drake, after the duo were reportedly seen kissing in the clubhouse after her victory against Victoria Azarenka in the Wimbledon quarter final last week.

A source said: ''Publicly she says they're just friends but Drake has been by Serena's side throughout the tournament and when they've been away from the public and relaxed, it's been pretty obvious that they are together.