Page: 'Led Zeppelin's Future Is Down To Plant' 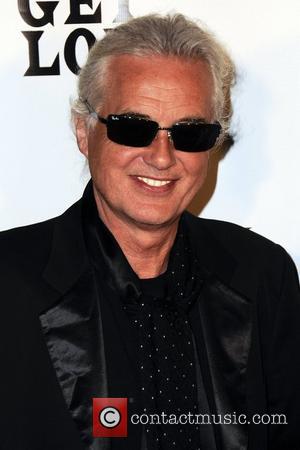 Picture: Jimmy Page of Led Zeppelin 'It Might Get Loud' after party held at the Palomar Hotel Los Angeles, California - 19.06.09

Jimmy Page is insisting the future of Led Zeppelin depends on his former bandmate Robert Plant - because they can't continue the group without the lead singer.
The legendary rockers sparked rumours of a reunion tour after Plant, Page and John Paul Jones reteamed for a benefit concert in London in December, 2007, but the singer has since rejected all offers to hit the road with his old pals.
Plant recently sparked speculation he may reform the band once more for iconic U.K. music festival Glastonbury next summer (10), after admitting he'd been in talks with organiser Michael Eavis, but he has continually dismissed reports they will regroup.
Page is planning to work on new music in 2010, but despite making it clear he'd welcome a Led Zeppelin reunion, he refuses to carry the band's moniker without Plant's involvement.
He says, "You'd better ask Robert Plant what the future of Led Zeppelin is. Musicians can always play together but I don't think you can go out with a band called Led Zeppelin if you haven't got the original vocalist."