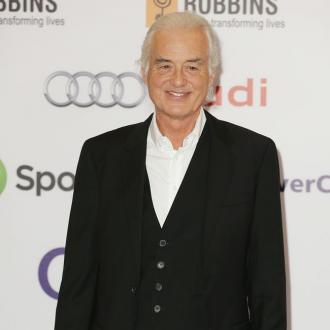 The legendary Led Zeppelin guitarist was presented with the prestigious accolade at the Nordoff Robbins O2 Silver Clef Awards this afternoon and admitted he had a good ''vibe'' about his prize when arrived at the London Hilton hotel.

Speaking at the event, Jimmy told BANG Showbiz: ''I'm thrilled about winning this award, I'm actually getting more of a vibe about it since I walked through the door and got more of an understanding of just how weighty the whole occasion is.''

Nordoff Robbins is a charity that provides therapy for thousands of people across the UK, helping adults and children who suffer from autism and dementia and who have had strokes open up and connect to their surroundings with music.

Jimmy, 70, was pleased to discover the original Silver Clef concert he played with Led Zeppelin singer Robert Plant in 1976 was the start of the awards and the charity's work.

He said: ''I played on the original Silver Clef show that was way back at Knebworth which had Cliff Richard and Pink Floyd and I played with Robert Plant there.

''I went to the Nordoff Robbins centre the other day and they told me that the centre was established from that charity concert so that was really nice to find out. When I was at the centre I met someone who was a recipient of the work the charity is doing and it was quite a moving experience I have to say. When you see the results that they get you can see it's what you always believed music could do. Music is a great communicator and something that really elates the spirit or it can take you another way, but it's something that communicates with you. Music has a power.''

Other winners at the event included Giorgio Moroder, who was presented with the American Express Innovation Award, Black Sabbath - who won the AEG Live Ambassadors of Rock Award - and Pharrell Williams, who took home the Raymond Weil International Award.