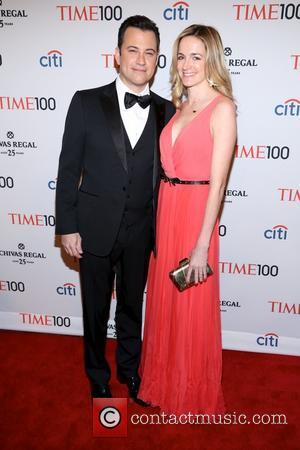 Picture: Jimmy Kimmel and Gina Kimmel - TIME 100 Gala TIME'S 100 Most Influential People In The World at Jazz at Lincoln Center- Inside Arrivals -...

Ok, so there's plenty of serious music fans at the Coachella Valley Music and Arts Festival, though there's also those who have no idea who they're watching, where they are, or why they're there. You've seen them wandering around - they chose their festival outfit about 6 months ago. Anyway, Jimmy Kimmel skewered plenty of fake music fans at this year's festival by getting them to gush about bands that, err, don't actually exist. "Music fans in general love knowing about bands that no one else has ever heard of," Jimmy Kimmel said as he introduced a Coachella edition of his 'Lie Witness News.'

Sending his cameras into the maelstrom, Kimmel caught one guy saying of the completely fictitious Obesity Epidemic, "I just like their whole style. Their whole genre is great. They are very innovative, and they're new." Other fake bands included Get The.Out Of My Pool and our personal favourite The Chelsea Clintons. "I think they just give off that energy, like you can just tell they're doing it from a good place," said one reveller of the band.

The reporter was keen to push, Doctor Shlmo and the GI Clinic, which one gig-goer said she was "really excited to see them live.." and Shorty Jizzle and the Plumbercrucks were described as "unique for sure". Two Door Cinema Club were the only real band used in the segment, though one music 'fan' said he'd enjoyed their album 'DJ Cornmeal'. Doh!