Be prepared to feel amused and totally creeped out all at the same time.

On Thursday night’s edition of ‘The Tonight Show’, host Jimmy Fallon unveiled what has got to be the creepiest of all the creepy duets. In the pre taped skit, Jimmy and five (yes five!) identical Jimmy Fallon waxworks give a hilarious, if yet totally disturbing rendition of the Beach Boy’s 1965 classic ‘Barbara Ann’. 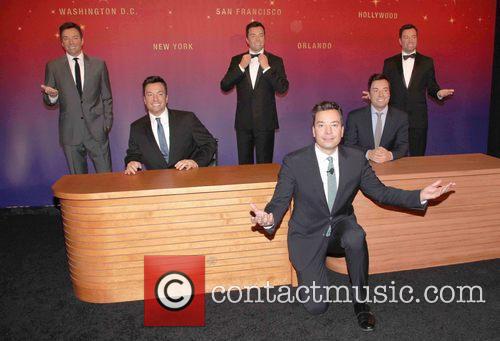 That's a lot of Jimmy Fallons

The skit begins with Jimmy answering a call from his mom as The Beach Boy’s classic plays as his ringtone. "Hey Mom!" the host says. "They just dropped off my wax figures from Madame Tussauds. It's amazing. The details, everything, it looks just like me.”

Jimmy is then told his show is about to begin in five minutes, but the funnyman seems a little distracted as he starts singing ‘Barbara Ann’ to himself. But then things start to get really weird, as out of nowhere five creepy voices chime in to harmonise with Fallon. Yes, those waxworks have come to life!

But Jimmy doesn't seemed to phased by it all as he dances and claps with the figures which remain completely poker faced. Despite being a little off-putting, the Fallon waxworks certainly do rival the real thing in the style stakes as they’re all sporting suits, with one wearing a tuxedo a la Jimmy’s time hosting the Emmy Awards in 2010.

At one point Fallon and his backing singers are interrupted as his 'Tonight Show' colleague Questlove stumbles in and asks, "What the f—k?" Which is exactly what the rest of us were thinking.

But it’s not long before things take a wrong turn as the music starts to become decidedly more sinister as the waxworks appear to edge in on Jimmy. The end comes as a startled Fallon wakes up in bed to realise the whole thing was just dream, before finding that the five wax figures are resting beside him in his bed!

Of course the five Jimmys weren't made just for laughs. The figures will soon be featured at Madame Tussauds' wax museums in New York, Los Angeles, San Francisco, Orlando, and Washington D.C.