Jimmy Fallon presents probably his most childish 'Tonight Show' skit ever with 'Southpaw' star Jake Gyllenhaal, and it's utterly disgusting. They're spraying each other with mouthfuls of food and beverages, and it just gets more and more nauseating by the minute. And yet, for some reason, it's hilarious. 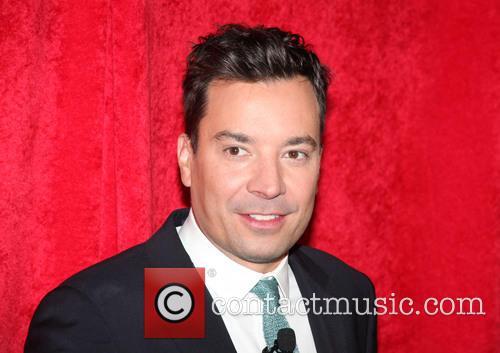 Jimmy Fallon bonds with Jake Gyllenhaal on 'The Tonight Show'

There's nothing funny about being sprayed in the faced with Powerade, coffee, apple or pie in reality, but when Jimmy Fallon and Jake Gyllenhaal did it to each other dressed as cops in their fake cop show 'Point Pleasant Police Department' on 'The Tonight Show With Jimmy Fallon' yesterday (March 21st 2016), nobody could stop laughing.

The set up is that the pair once played two cops named Parker and Pete on this fictitious throwback show, who tend not to get along so well. In fact, all they do is yell and spit food at each other. 'I've had some pretty intense roles, but this was the most intense', Gyllenhaal said between clips.

If there was a score chart on this, we think Gyllenhaal would definitely top it, but that's mainly down to the fact that Fallon appears to be concentrating more on keeping his fake moustache attached to his face than matching up to Gyllenhaal's spitting standards. And while he did manage to get Gyllenhaal sufficiently drenched in milkshake during the second round, he was the one struggling to wipe Prosecco from his eyes and nostrils by the end of it.

The final clip just sees the pair doing whatever they can to cake each other in crumbs and spit - no words are needed. Gyllenhaal has the perfect 'is that all you got?' face when Fallon fails to match his own food attack, and the television host looks sufficiently blinded and uncomfortable after he's done.

It was a bonding experience we'd be happy never to experience ourselves.