Funnyman Jimmy Fallon Was Hospitalised Again On Saturday Night (24oct15) After Falling And Injuring His Hand At A Gala. 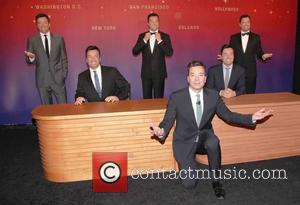 The Fever Pitch star and U.S. late night host was in Cambridge, Massachusetts to accept an honour from the Harvard Lampoon - the university's humour magazine - when he tripped and fell, injuring his right hand.

The accident happened just months after he seriously hurt his left hand in June (15), almost losing his ring finger in a freak kitchen accident.

A source says, "Everything is totally fine... It was all part of the celebration in the street and some random girl kneeled down in front of him abruptly as he was turning around and he tripped over her because he didn't see her."

Fallon has indicated the injury was not too serious, posting an Instagram photo of his right hand on Sunday with the caption: "Nothing that a few band aids couldn't fix."