Jimmy Fallon feels lucky to be a dad

Jimmy Fallon feels ''lucky'' to be a father to daughter Winnie - who was born via a surrogate -because he and wife Nancy Juvonen struggled to have children. 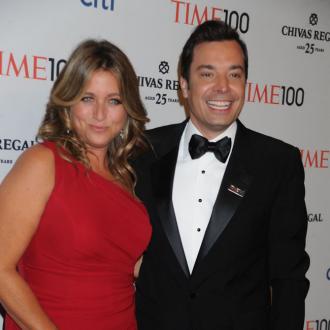 Jimmy Fallon feels ''lucky'' to have become a father.

The 39-year-old talk show host and wife Nancy Juvonen became parents to daughter Winnie - who was born via a surrogate - last July and he admits becoming a parent was such a ''struggle'', he wasn't sure he ever would.

Interviewing himself for America's Men's Health magazine, he said: ''You have a baby, which you've been wanting for a long time. You felt very lucky that it happened at all. We had a long struggle with that. We did.''

Jimmy will take over from Jay Leno as host of 'The Tonight Show' next month and though he is thrilled to have landed the job, he admits nothing makes him happier than being at home with his family.

He said: ''There'll be nights when you're sitting on your couch, and you're with your beautiful wife, who you can't believe married you, and your beautiful baby, who you feel endlessly grateful you were able to have. And your dog ... You're watching 'Real Housewives' getting into fist-fights on TV. And you go, 'How great is my life? I'm so happy right now.' That trumps your 'Tonight' gig? It really does. That's what true happiness is right there.''

Jimmy - who married Nancy in 2007 - always ''knew'' the film producer was the right woman for him because they have so much fun together.

Discussing how he knew he'd found the right person, he said: ''The truest thing I can say is ... sometimes you just know. But that's terrible advice. The only people who say that are the people who just knew.

''How do you know unless you found that person? I think you just look for the person you have the most fun with. And that's enough.

''You realise, 'Wait, I can just keep having fun with her forever?' Yes, you can do that. It's the secret. Look at Paul Newman and Joanne Woodward.''