Posted in Press Releases on 27 November 2012 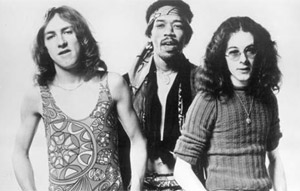 "People, Hell & Angels" showcases the legendary guitarist working outside of the original Jimi Hendrix Experience trio. Beginning in 1968, Jimi Hendrix grew restless, eager to develop new material with old friends and new ensembles. Outside the view of a massive audience that had established the Experience as rock's largest grossing concert act and simultaneously placed two of his albums in the US Top 10 sales chart, Jimi was busy working behind the scenes to craft his next musical statement.

These twelve recordings encompass a variety of unique sounds and styles incorporating many of the elements-horns, keyboards, percussion and second guitar-Jimi wanted to incorporate within his new music. "People, Hell & Angels" presents some of the finest Jimi Hendrix guitar work ever issued and provides a compelling window into his growth as a songwriter, musician and producer.

With an album title coined by Jimi Hendrix, "People, Hell & Angels" reveals some of Hendrix's post-Experience ambitions and directions as he worked with new musicians - including the Buffalo Springfield's Stephen Stills, drummer Buddy Miles, Billy Cox (with whom Hendrix had served in the 101st US Army Airborne and later played on the famed R&B 'chitlin circuit' together) and others - creating fresh and exciting sounds for the next chapter in his extraordinary career.

"People, Hell & Angels" is co-produced by Janie Hendrix, Eddie Kramer and John McDermott. Kramer first met Hendrix at Olympic Studios in London in January 1967. Hendrix, who would have turned 70 on 27 November this year, developed a unique rapport with Kramer. As a result, Kramer engineered every album issued by the guitarist in his lifetime and recorded such famous Hendrix concerts as the Woodstock festival in August 1969. Since 1997, Kramer has teamed with Janie Hendrix and John McDermott to oversee the release of each Jimi Hendrix album issued by Experience Hendrix.

Unlike contemporaries such as the Beatles or Bob Dylan, Jimi Hendrix owned his songs and master recordings.  He did not have to record his music at recording studios owned and operated by his record company. Hendrix spent countless hours recording his new music at new, independent music studios such as New York's Record Plant and the Hit Factory. Hendrix was so focused on recording his music that, concurrent with nearly all of the sessions featured as part of "People, Hell & Angels", he was underwriting the construction of his own recording facility--the state of the art Electric Lady Studios in Greenwich Village.

Janie L. Hendrix, President / CEO of Experience Hendrix LLC, commented, "We're thrilled to be able to release "People, Hell & Angels" during the celebration of the 70th anniversary of my brother's birth.  The brilliance of the album serves to underscore what we've known all along: that there has never been and never will be a musical force equal to his and that we cherish and take inspiration of what he left us both now and for many generations to come...simply eternity".