The stars of the film, 'Home', Jim Parsons and Rihanna, have spoken out about what drew them to the project, and what made it so special.

Already a global hit, the DreamWorks animated adventure 'Home' opens in America this weekend, featuring a leading couple that would be hard to imagine starring together in a live-action movie: 'The Big Bang Theory' star, Jim Parsons, and global superstar Rihanna. 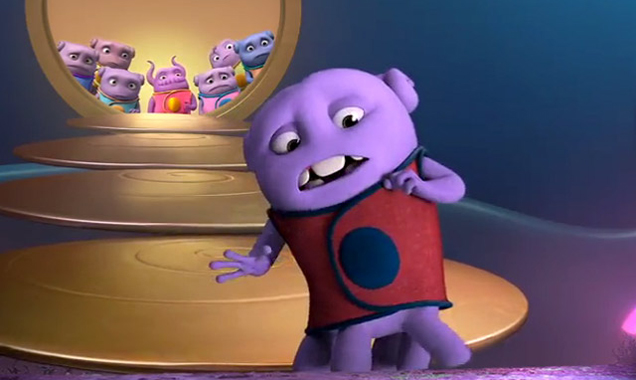 Jim Parsons provides the voice of Oh in 'Home'

Surprisingly, they found they had a lot in common as they approached the project. "Neither of us had ever done an animated film, and the story just spoke to me," Rihanna said. "It was so real, and I found so many parallels in it."

More: Read The Review For 'Home'

"Even before I knew what the story was I was very excited about the idea because I wanted a chance to do an animated film," Parsons continued. "And then, once we talked about it, I just liked the little character that I was playing so much, even the way he looked."

Parsons said that providing voices for the movie was "the most interesting playtime I've ever had as an actor."

Watch The Trailer For 'Home', Here:

"You learn so much when the camera is not there," Rihanna added. "Especially for me, being from Barbados, I have an accent, so learning to speak American you realise that there's 20 different types of American. I was learning all over again, not just about accents but also how to act with my voice. And we had a lot of emotional moments in this film that I didn't really expect."

"The movie is about friendship," Parsons said, "and how if you're open to it, some real magic can come into your life that way. It's also about how 'Home' is where you feel un-judged, and that what you do isn't necessarily stupid or wrong or something."

More: 'Home' Is A Hit Even Before It Opens

"Personally, for me, I felt like the message of the movie became clearer and clearer as it went on," Rihanna said. "For me home is wherever I feel safe, or safest. Most of the time that's just Barbados: it's warm, it's beautiful, there's the beach, my family, the food, the music."