The 41-year-old actor was joined by his 'Big Bang' co-stars while accepting the 2,545th star on the Hollywood Walk of Fame.

Well deserved! The star of the CBS comedy 'The Big Bang Theory', Jim Parsons, received a huge honour on Wednesday (March 11th) as he was presented with the 2,545th star on the Hollywood Walk of Fame. 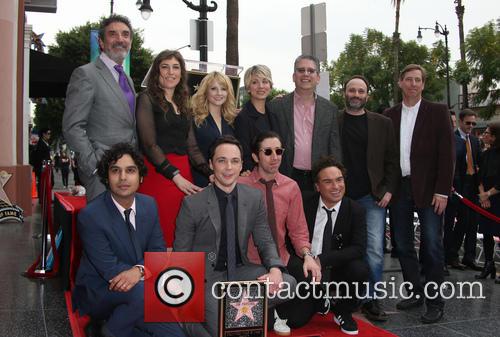 Parsons accepting his star on the Hollywood Walk of Fame

Among the people who came out to attend the ceremony were the 41-year-old actor's 'Big Bang' co-stars Kaley Cuoco, Johnny Galecki, Kunal Nayyar, Mayim Bialik, Melissa Rauch and Simon Helberg, as well as its creator Chuck Lorre.

While speaking after the unveiling of the star, Parsons, who was clearly overwhelmed, chose not to take credit for success of his fan favourite character Sheldon Cooper.

"Why I'm specifically here today, the biggest reason is because I had the chance to play this incredible character that I neither created nor write for nor put into a series," he told the crowd of fans. "That credit goes to Chuck Lorre and Bill Prady and Steven Molaro."

The four-time Emmy-winner, who was also joined by his boyfriend Todd Spiewak and his mother Judy, took some time to thank his supportive family as well.

"One of the things I know is, the main reason I'm in this career and here today, is because of my family and the support they gave me, and the way I was encouraged to pursue this insane dream of acting, from Texas to here," he gushed.

Even though Parsons tried to remain as humble as possible, Chuck Lorre couldn't help but compliment the honouree on the huge impact he made on the beloved sitcom.

"I don't think there's any argument that you're the pivotal reason for our success, you have clearly accomplished something that is beyond anyone's imagination. The show exists all over the world and people laugh at your work and look forward to your work and it makes people's lives a little bit better every day, everywhere."