The Big Bang Theory is going strong, but are talent shows on the way down?

The geeks are coming. American Idol can’t beat out the Big Bang Theory when it comes to the ratings; people enjoy Sheldon, Leaonard, Howard and Raj just too much to switch off for some talent show.

But it’s not just the brand new episodes of Big Bang that are making the American Idol bosses angry; the re-runs are even keeping those wannabee stars off the top spot. The new episode brought in 11.2 million viewers and a 3.0 rating at 8 p.m., in the 18-34 demographics. The 9 p.m. repeat episode brought in 10.8 million viewers and a 3.2. TV execs love the 18-34 gang because advertisers love them too. They’ve got a bigger disposable income, and are more likely to splash out. Pus, they’re the easiest to market to. Kaley Cuoco, Johnny Galecki, Jim Parsons, Simon Helberg and Kunal Nayyar have reached prominence with their roles in The BBT, and have become household names because of it. This success has lead to a significant rise in their salaries, with reports of a rise from $60,000 to $200,000 per episode during the fourth season. 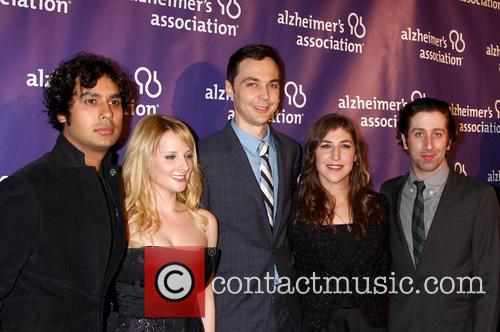 The gang minus Leonard and Penny

So Chuck Lorre's CBS sitcom lives on while American Idol fails. Are we reaching the end of the on-screen talent show? Sitcoms represent a fantastic opportunity to rerun episodes, as you can see from the viewing stats. People love to watch them again and again, meaning money for the writers, actors, and the studio, as advertisers know that reruns are strong. On the flipside, people don’t really watch talent shows multiple times.