Rappers Jim Jones And Juelz Santana Have Reportedly Been Forced To Cancel Their Tour Of Canada After They Were Denied Entry Into The Country Due To Their Past Legal Troubles. 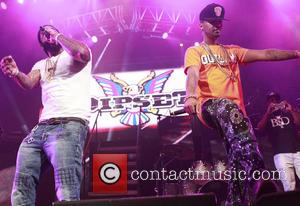 The Dipset hitmakers were set to kick-off an 11-city tour with rapper Trav this week (ends14Jun15), but when they arrived at the border on Wednesday (10Jun15), they were turned away, according to TMZ.com.

The rappers had reportedly hired lawyers to work with America's Federal Bureau of Investigation (FBI) and immigration services and were assured they would be able to enter Canada.

Jones was previously arrested for fighting at a Connecticut casino in 2012 and driving while intoxicated (DWI) and disorderly conduct in 2013, while Santana has been booked for making death threats in 2009 and making terroristic threats in 2011.