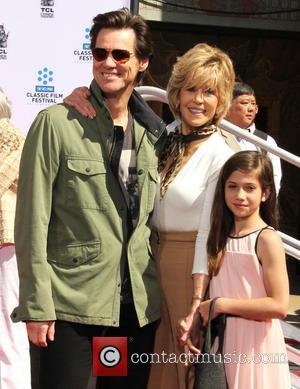 The 75-year-old double Oscar winner made her mark outside the city's famous Chinese Theatre just steps away from the imprints left by her father Henry Fonda, and a large crowd turned out for the actress' big moment.

Fonda's actor son Troy Garity spoke at the ceremony and revealed the handprints outside the theatre have made him feel close to his late grandfather, saying, "Being able to put my hand in his print really offered a wonder connection to him, and I realised that this is a great connection to the past and inspiration to the future. And I really hope that one day my children will be able to put their hand in the print of their wonderful grandmother."

Fonda joked of the honour, "I swear I was beginning to think that the only way Hollywood was going to give me this opportunity was if the city laid a new sidewalk in front of my house. What is particularly meaningful to me is that I'm going to be right next to my dad right over there and I can feel his presence right now and he used to say to me, 'Jane, don't let this town walk all over you.' Well dad, right now the town can walk all over both of us forever."

The actress made her handprint unique by imprinting a peace sign in the cement.