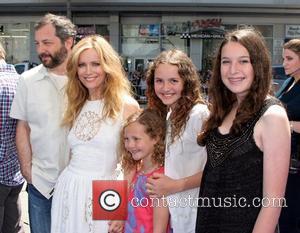 Judd Apatow cut several of Jill Clayburgh's scenes from new movie Bridesmaids because he didn't want cinema-goers to remember the late actress for her "dirty" jokes in the comedy.
Clayburgh, 66, died in November (10) after losing her 21-year battle with chronic lymphocytic leukaemia.
Bridesmaids is her final film, and producer Apatow reveals he edited certain edgy lines from the movie so as not to tarnish Clayburgh's memory.
He tells Collider.com, "We took some dirty Jill Clayburgh jokes out because I just thought, 'That can't be the last thing she ever says in a film.'
"We did debate it. We were like, 'That's funny, but that would be questionable.' She was the nicest woman. We're all so influenced by her work and her acting style. We really appreciate that real, naturalistic acting style. She was just a great woman. None of us knew she was sick. She was just awesome, every day."
Actress Kristen Wiig also has fond memories of working with the late star on the movie: "I felt honoured the moment she signed on. She was just what you would think. She was a very maternal, nurturing spirit. She was also game for anything. There were times when she was saying things and I would just start laughing. I was like, 'Oh, my God, I'm making Jill Clayburgh talk about motor-boating,' which didn't end up in the movie. She was amazing. I feel honoured to have worked with her."