Jessie J is keen to work with Miley Cyrus and has backed the blonde star after her recent controversial 'twerking' routine at the MTV Video Music Awards. 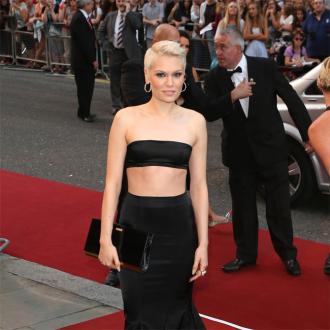 The 25-year-old singer - who co-wrote Miley's hit track 'Party in the USA' - has backed the 20-year-old beauty following her controversial twerking routine with Robin Thicke at the MTV Video Music Awards (VMAs), and is keen to team up with her on a new track.

Speaking at the MOBO nominations launch, she told the Daily Star newspaper: ''Miley at the moment is like olives; you either love her or hate her. You can't do anything in this industry without testing it, and that means to do it for real in front of people. I'd love to work with her again.''

Jessie also recently collaborated with Robin on the song 'Calling All Hearts', which will appear on DJ Cassidy's new album, but she will not be taking tips from Miley's twerking - during which she gyrated around Robin in a nude-coloured bikini - when she films the video for the track.

She added: ''It's an amazing song and we're shooting the video in three weeks. It's a proper Earth, Wind And Fire throwback track.''

Despite her success, Jessie has only released one studio album, 2011's 'Who You Are' - which spawned several singles including 'Do it Like a Dude' and 'Price Tag' - but her new record, 'Alive', will have a more mature sound as she has grown up a lot since penning her debut.

She said: ''The reception's been great. It's not all poppy; it's more mature and more about vocals and soul.''

'Alive' is released on September 15.