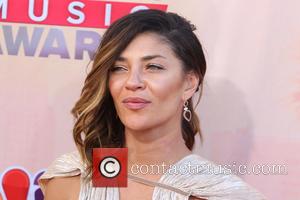 Picture: Jessica Szohr - A variety of stars were photographed as they attended the 2nd Annual iHeartRadio Music Awards which were held at the Shrine Auditorium...

Former New York Jets wide receiver MCKnight shared a collage of photos of his festival crew, including Szohr, on Instagram earlier this month (Apr15) and captioned it, "Great times with even greater people. Old friends and new. Peace out Coachilla (sic)."

He also sent Szohr a sweet birthday message online on 31 March (15), when she turned 30, writing, "Happy birthday to this girl @itsmejessicaszohr - beautiful inside and out."

The actress, who previously dated her Gossip Girl co-star Ed Westwick, has yet to publicly comment on the budding romance, which reportedly began in late 2014, although she has shared the occasional photo of the pair online.

MCKnight and Panettiere enjoyed an 18-month relationship before their split in 2012. The Nashville beauty has since become engaged to Ukrainian boxer Wladimir Klitschko, the father of her baby girl Kaya, who was born in December (14).

Jessica Szohr, Vanessa Bayer And Melissa McCarthy Pose For Papz As They Are Spotted In Soho