Jessica Simpson was surprised by her second pregnancy, and her unexpected baby has postponed her wedding plans with Eric Johnson. 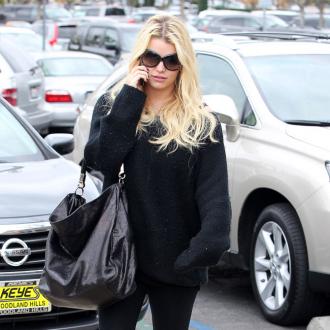 Jessica Simpson was shocked by her second pregnancy, which has postponed her wedding.

The 32-year-old singer discovered she was expecting again just eight months after she welcomed her daughter Maxwell into the world last May, her first baby with her fiancé of two years, retired NFL star Eric Johnson.

Although the baby wasn't planned she is delighted to be becoming a mother again and is more than happy to put her nuptials on ice.

Speaking on 'The Tonight Show', she said: ''Apparently it was a part of God's plan for my life. I was extremely shocked ... because I was going through a lot of hormonal changes, trying to get back to the old, vibrant Jessica.

''You know, it was kind of like a one-night stand. And it happened all over again!''

After her baby is born the 'Fashion Star' judge joked she will avoid any bedroom fun for a while so she can organise her wedding.

She quipped: ''We've had two different wedding dates, but he keeps knocking me up. We're doing it very backwards, I know ... I'll just keep my legs crossed, I guess, this time.''

Jessica also knows she has to keep an eye on her weight, after realising how easily she put on the pounds with Maxwell because she was craving ''everything''.

The 'With You' hitmaker admitted: ''I was really happy to be pregnant and I didn't ever step on the scale.

''I didn't realise you could gain that much weight that quickly. I didn't really make any healthy good decisions.''

Her story will be brought to TV when she stars in a sitcom loosely based on her pregnancy.

She explained: ''How that girl deals with [pregnancy] and everything else ... I will be playing myself, which is pretty easy.

''We don't have a name yet, we're just now in the process of casting everyone, doing the pilot. I will be playing myself but we'll have actors playing Eric and my dad. That'll be funny.''