Newly-wed Jessica Simpson has shared loved up photos of new husband Eric Johnson from her honeymoon in Mexico, following their romantic wedding on July 5. 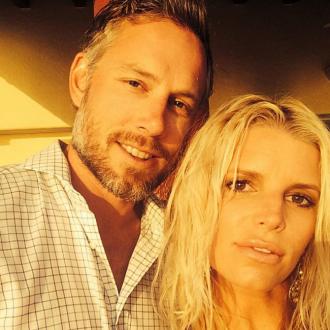 Jessica Simpson has paid tribute to her new husband on their return from honeymoon.

The singer-turned-designer tied the knot with former NFL player Eric Johnson on July 5, and following a relaxing post-wedding break in Punta Mita, Mexico, it would seem she is more in love than ever.

Jessica posted a series of photos on Instagram proclaiming her love, one of which showed her cuddling up to Eric as she gazed seductively at the camera, to accompany the image, she wrote: ''I love this man, our marriage, and everything in between''

She then shared another selfie with the pair posing with their tongues sticking out, which she simply captioned: ''Yummy''

Earlier on, the 34-year-old businesswoman - who has children Maxwell, two, and Ace, 13 months, with Eric - posted a photo from her honeymoon, showing off her dramatic weight loss to its fullest effect.

Posing with her hand on her hip, Jessica's fans were given a glimpse of her impressive wedding ring

Jessica's followers were even treated to a view of the gorgeous ocean from her hotel room, which was located in the luxurious Four Seasons Punta Mita Resort.

A source told Us Weekly magazine: They had an amazing time and looked so in love during the entire visit. They enjoyed cocktails by the pool and spent a lot of time on the beach, just relaxing after their big day.''