Jessica Simpson accidentally confirmed she is having a baby boy by talking about her unborn little one's ''weiner'' making her ''nauseous''. 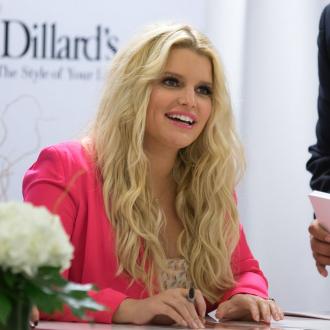 Jessica Simpson has accidentally confirmed she is having a baby boy.

The 32-year-old beauty - who has a 10-month-old daughter Maxwell and is pregnant with her second child with fiance Eric Johnson - wanted to keep the sex of her little one a secret but while talking about how she was been suffering ''awful'' morning sickness, she accidentally let the information slip.

Speaking on 'Jimmy Kimmel Live' yesterday (06.03.13), she said: ''It's a total different pregnancy. I just feel awful. I've been vomiting. I had no idea that a wiener can make me nauseous.

''Oh shucks! Well I guess told the world that I was having a boy.

''I just outed that I am having a boy. I can't believe I did that. It was not planned.

''It was kind of out and about in the press that I was having a boy. I was like 'How do people know these things'?''

The 'Fashion Star' mentor - who gave birth to Maxwell in May last year - also revealed she has planned her wedding to the retired NFL star a number of times but has to keep postponing the big day because she is always getting pregnant.

She added: ''I keep planning on getting married, but I keep getting knocked up. It's just one of those things. Maybe I should go back to when I was younger, I was a virgin before I was married, so maybe I should just completely reverse and stop having sex altogether until Eric and I actually say I do.''