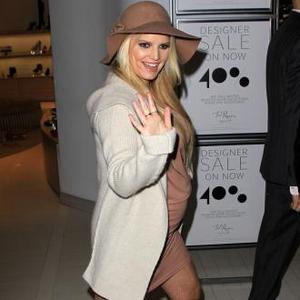 Jessica Simpson has given birth to a baby girl named Maxwell.

The 31-year-old singer - who had been dating fiancÃ© Eric Johnson for six months when she became pregnant - gave birth to the 9lb 18 oz baby this morning (01.05.12) and have given her the full moniker Maxwell Drew Johnson.

The name comes from Jessica's maternal grandmother Tina whose maiden name is Drew.

Jessica's family were spotted at a Los Angeles hospital today sparking speculation she was in labour.

The baby is more than a week overdue, having been expected on April 21.

Last month Jessica held a baby shower where she received a number of gifts from stars including Jessica Alba, her sister Ashlee and 'Grey's Anatomy' star Ellen Pompeo.

A source said: ''It was a kid friendly shower with many of her friends bringing babies. She received tons of gifts mostly wrapped in Pink gift wrap and Boxes. There were several books, stuffed toys and clothes among other items.''

Guests were treated to extravagant buffet food featuring some of Jessica's favourite cuisine, including deep friend Oreos and Twinkies.