Jessica Simpson was one of the star guests at yesterday's (09.09.10) New York Fashion Week opening, but failed to impress critics with her outfit choice. 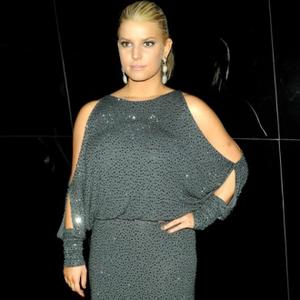 Jessica Simpson was one of the star guests as New York Fashion Week officially got underway yesterday (09.09.10).

The singer-and-actress was at the 'Project Runway' season eight fashion show, but failed to impress onlookers with her outfit.

The 30-year-old beauty wore a loose-fitting sparkly charcoal Michael Kors dress, but swamped her sexy curves in the frumpy number.

However, 'Project Runway' presenter Heidi Klum also failed to impress with her choice of a red suit, which had a prison inmate feel to it.

During New York Fashion Week, Jessica will debut her latest denim collection, and has vowed to use real Women on the catwalk, rather than models.

Other designers to have showcased their collections yesterday included design duo Vena Cava, whose pieces had an 80s feel, with rolled cuff overalls, pyjama bottoms and boxy jackets all taking centre stage.

Meanwhile, Ruffian's show was dominated by skirts, giving an indication the ladylike look will still be hot this season, while Jen Kao brought the day to an end with a romance-inspired collection.