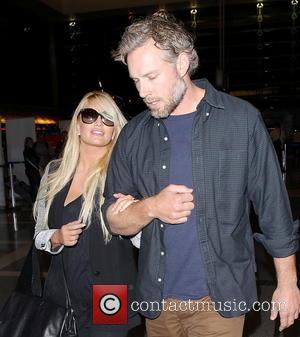 Singer Jessica Simpson shed a few extra pounds in the lead-up to her weekend (05Jul14) wedding by adopting a strict vegan diet.

The blonde beauty has been showing off a slimmer figure in recent months after losing the pregnancy pounds from carrying her second child, son Ace, last year (13) with the help of a food plan from Weight Watchers, for which she is a spokeswoman.

However, Simpson wanted to make sure she looked her absolute best when she exchanged vows with former American footballer Eric Johnson in California on Saturday, so she temporarily cut out all animal products from her diet.

A source tells UsMagazine.com, "Jessica did a vegan diet for about two weeks leading up to the wedding."

The newlywed also reportedly boosted her vitamin levels by getting "quite a few" B12 shots to help maintain a healthy brain and nervous system.

Simpson has since returned to her meat-eating ways - at a pre-wedding Independence Day bash on Friday (04Jul14), guests were treated to a feast of beef brisket, smoked barbecue baby back ribs, fried chicken and grilled shrimp, as well as a variety of pies and watermelon.

Simpson isn't the first superstar to go vegan - Jennifer Lopez recently adopted the plant-based diet to get her in tip-top shape for the release of her new album Aka, while Beyonce and her rapper husband Jay Z also tried a 22-day vegan challenge last year (13).