Chastain is the star of 'The Zookeeper's Wife', which comes out in Britain on April 28th.

Jessica Chastain has spoken about the experience of making her new movie The Zookeeper’s Wife, which is released in the United Kingdom at the end of this month.

The movie tells the true story of the owners of Warsaw Zoo, Antonina and Jan Zabinski, who rescue hundreds of Jewish refugees and animals as the Polish capital is overrun by invading Nazi forces at the start of World War II by hiding them in the abandoned zoo.

Filming it on set, Chastain found that one of the oldest adages in showbiz – never work with animals or children – didn’t ring true for her, as she really enjoyed the experience!

“I love working with animals and children! When you’re an actor it’s a great challenge because they’re so in the moment, you don’t know what they’re going to do, they can always surprise you and it’s wonderful to react to that. Also I love animals and children anyway!” she laughed.

Watch the trailer for 'The Zookeeper's Wife' here:

Some scenes involve Chastain, who plays Antonina, playing with elephants. In order to get the massive beasts to co-operate, she had a trick up her sleeve.

“What I would do, before each take, is feed her a bunch of apples, but right before the director said ‘Action’ I would let her see one apple and then hide it behind me. So what you’re seeing is her playing with me, but she’s actually looking for food.”

The 40 year old star also revealed the extent of the research she put into her character ahead of filming.

“I read the book [‘The Zookeeper’s Wife’ by Diane Ackerman] and it was very informative, thinking of what she was going through, because it’s in her own words… I went to Auschwitz, as I’d never been to any of the concentration camps and I wanted to feel the atmosphere of that place… and I went to Warsaw and the zoo and met Theresa [Antonina’s daughter], saw the house they lived in and saw pictures. It was definitely an immersion.” 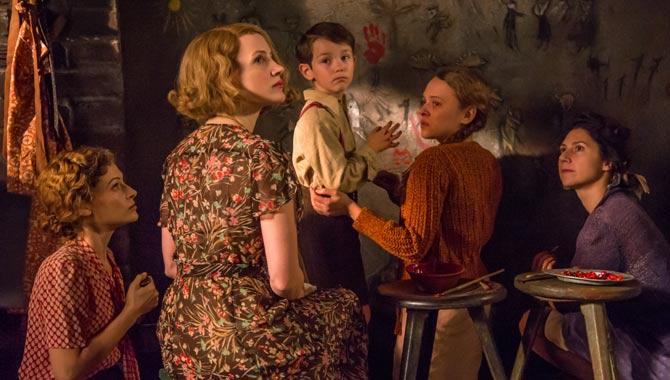 The cast of 'The Zookeeper's Wife'

On working with the film’s director Niki Caro, the New Zealand-born filmmaker whose credits include McFarland, USA and The Vintner’s Luck, Chastain was glowing in her assessment.

“She was very good at wrangling in this huge group of people, and animals, in this period drama, and you never felt like the set was getting away from her. I felt that she was a great collaborator, I could come forward and try whatever I wanted and take risks, and she was always there to support me.”

The Zookeeper's Wife is released in the United Kingdom on April 28th.