Actress Jessica Chastain Gave Madonna A Friendly Spanking As She Served As A Surprise Guest At The Pop Star's Concert In Prague On Saturday (07nov15). 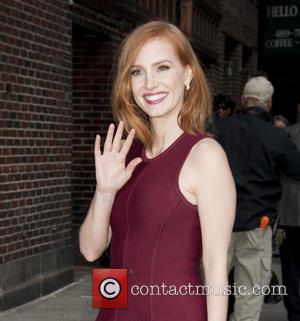 The Zero Dark Thirty star is currently in the Czech Republic shooting a new film called The Zookeeper's Wife, and during her time off, Jessica decided to attend the Queen of Pop's Rebel Heart tour Stop at the O2 Arena.

During her song Unapologetic B**ch, Madonna invited Jessica on stage to walk with the star on the runway leading up to the main stage. At one point during the surprise appearance, Jessica showed off her impressive dance moves while the dancers and Madonna cheered her on at her feet.

Madonna then bent over on all fours, and Jessica took the opportunity to slap the pop icon's bottom multiple times.

"You were a very good b**ch," Madonna told Jessica after the performance.

The actress later took to Facebook.com to share a fan shot video of her rock star moment, writing, "I gave Madonna a spanking and I've a video to prove it."

She later added, "The moment right before @madonna handed me a banana. The fkn (sic) QUEEN."

Jessica is the latest celebrity to make a cameo on Madonna's Rebel Heart tour - the Material Girl previously invited Katy Perry, comedienne Amy Schumer and U.S. newsman Anderson Cooper to dance with her on stage.

Huffington Post: Madonna Gets A Spanking From Jessica Chastain On Stage In Prague