Jessica Chastain doesn't think she could ever marry an actor because she wouldn't want to ''talk shop'' at home. 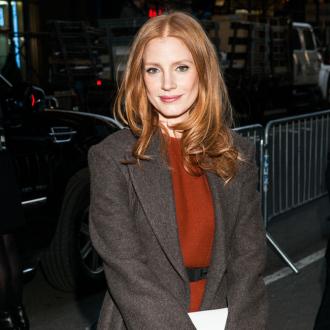 'The Help' star - who is seeing fashion executive Gian Luca Passi - could never settle down with a fellow thespian because she likes to save her drama for the big screen.

She scoffed: ''I don't need any drama at home, only on screen! Talking shop, auditions, etcetera when I get home in the evening would be very boring.''

The 36-year-old star has been a constant fixture in some of Hollywood's biggest films in the last two years, including 'The Tree of Life' and 'Zero Dark Thirty', which she finds amusing as she struggled to get cast for years because of her red hair.

Jessica told French magazine Madame Figaro: ''I'm a bit scared people will get sick of me! I'm living proof of what they say in Hollywood: you have to wait 10 years before success comes overnight.

''I would never have believed I could be successful in film. In Los Angeles, casting directors didn't know what to do with my red hair. I didn't look modern enough. I was offered a lot of unhinged characters!''

The star credits veteran actor Al Pacino with giving her the big break she needed three years after graduating from Julliard, and making her see she could have a career in film.

Jessica added: ''It wasn't until 2006 that I took to the stage in LA, in Oscar Wilde's 'Salome' directed by Al Pacino, who was making a movie about the play at the same time.

''Al helped me learn to love the camera. He was one of the best teachers I've had.''