Jessica Chastain promises one scene in her new horror flick 'Mama' is so scary that it will reduce people to quivering wrecks. 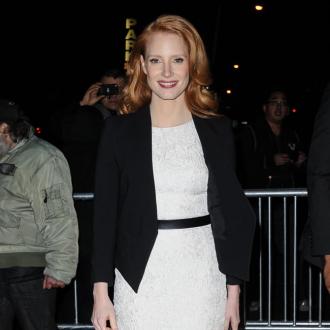 Jessica Chastain was terrified watching herself in 'Mama'.

The Golden Globe winner - who picked up the Best Actress gong for 'Zero Dark Thirty' on Sunday (13.01.13) - confessed her new indie horror movie is so nail-bitingly scary that she even upset herself watching it on the big screen, while her friend was reduced to a nervous wreck beside her.

The 31-year-old star plays Annabel, whose boyfriend Lucas (Nikolaj Coster-Waldau) takes in his orphaned nieces only to discover a jealous ghostly presence has followed them into their home.

Jessica laughed: ''When Annabel first meets Mama, that's really like, 'Oh my GOD!' I saw it with a friend of mine and he jumped, then he jumped again, and then he almost curled into my lap. I was laughing the whole time because I've never seen a guy do something like that.

''But that scene, it's not like it's just one jump, it keeps going - it's pretty incredible that whole sequence.''

The actress revealed that the biggest draw to working on Andy Muschietti's film was the chance to learn from inspirational executive producer, horror veteran Guillermo Del Toro.

She said: ''Guillermo, he's really passionate about this genre, and visually, he has just brilliant ideas. It was exciting as I'm such a fan of 'Pan's Labyrinth' and 'Hellboy,' so to be involved in something that he was working on was fantastic - it was part of the main reason I did 'Mama.'

''He's so intelligent and insightful about the genre, I learnt so much from him. For me, the great thing about this film is that it's a mixture of genres. Yes it's a horror film, but it's also like a Grimm's fairy tale, it's fantasy, and it's also a drama.''