Jessica Alba loves being a mother to two-year-old daughter Honor and wants to have more children with husband Cash Warren. 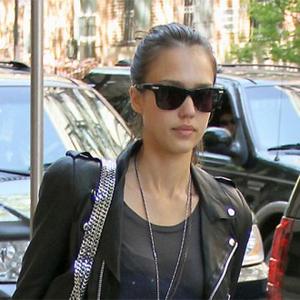 The 'Machete' actress - who has a two-year-old daughter Honor with husband Cash Warren - would love to extend her family further because she enjoys parenthood so much.

Asked if she wanted another child, she said: "Yeah, I think so, it's the best thing ever. So, having more kids, I can wrap my head around it."

Jessica admits her daughter can be stubborn and has very strong opinions, but she insists she isn't afraid to discipline the youngster.

She told US TV talk show host David Letterman: "She's walking and talking, she has lots of opinions. She talks about everything she wants and needs. She said she wants coffee in the morning.

"So I give her water in a coffee cup, she likes to have big girl cups and she likes Big Boy T-shirts and princess dresses. I didn't even teach her that stuff.

"I'm very strict with her. When it's time for her to eat, whether she's hollering or whatever, it's time to eat. She gets a time out if she cries for no reason. So then she stops because she doesn't want a time out.

"Sometimes she asks me to go to time out. If she does something bad she'll say, 'Honor time out?' and I'll say, 'Yeah, you're getting a time out.' "

The brunette beauty also revealed she used to "overfeed" her daughter so she wouldn't wake in the night.

She admitted: "When she was six months old I would over-feed her so when they're overfull they don't wake up hungry. That sounds abusive.

"She was really chubby - she was kind of big. She weighed just as much at six months as she does now. She had about eight rolls."